Top show jumpers to compete in the 2015 Nissan Winter Classic 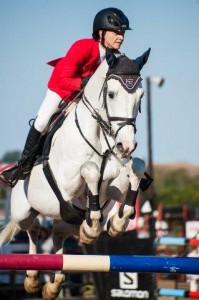 South Africa’s top show jumpers are preparing themselves for what is set to be a fiercely competitive Nissan Winter Classic.

The annual equestrian event will once again take place at KwaZulu-Natal’s scenic Durban Shongweni Club from 12 to 16 June where the biggest names in showjumping will prove why they’re so highly ranked.

Once again a top contender for the main title – the Nissan 1.5m FEI World Cup Qualifier – Horwood has an impressive list of titles to her name including SA Derby Champion three years in a row, winner of the SA Champs and last year’s winner of the SA Nissan Outdoor Grand Prix. Horwood and her horse, Mark White Nissan Capital Don Cumarco, were also awarded South Africa’s 2014 leading Horse and Rider Combination.

Commenting on her love for the annual Nissan Winter Classic, Horwood said: “The venue is amazing and the atmosphere is just great. The Shongweni Club always attracts big crowds, it’s such a social event with so much support.”

Asked which riders she was watching out for this year, Horwood said it was impossible to predict.

“There are so many great riders and such a high level of horse and rider combinations, it’s difficult to say. It varies so much and really depends on individual performances on the day.”

Organisers are anticipating a total of 450 horses at the event coming in from across the country.

Participants will be showing off their best skills during the five-day competition and those competing in the main FEI class will stand a chance of winning a whopping R60 000 in prize money.

Damaris Ismalun, an international judge, will be monitoring the international standard on behalf of the FEI, as well as submitting a report on the Nissan Winter Classic, presented by Foresyte Shows.

Mike Whitfield, Managing Director of Nissan SA, said that Nissan is proud to once again sponsor such a prestigious event.

“The Nissan Winter Classic has come to be seen as one of South Africa’s premiere showjumping competitions,” said Whitfield.

“The event not only attracts the horse riding elite, but is set in a stunning venue with international-quality courses and pristine finishes.”

Jodi Wolhuter, event spokesman, said this looked to be one of the biggest Nissan Winter Classic events yet.

“With the best riders and quality entertainment throughout the event, we are anticipating record crowd numbers,” said Wolhuter.

“This year we’ve brought back the thrilling Nissan 6 Bar competition which has proved to be a huge crowd pleaser in the past and in addition, we will host a Junior 6 Bar.”

The charity of choice for this year’s Nissan Winter Classic is the South African Riding for the Disabled Association (SARDA), a non-profit organisation which provides horse riding as therapy and skill for children with special needs from the greater Durban area. SARDA is an entirely volunteer-run and driven organisation that provides more than 1 000 riding sessions a year to children with physical and intellectual impairments.

Visitors to this year’s Nissan Winter Classic can also browse a variety of quality craft stalls, sample some of the delicious food on sale or check out the impressive Nissan vehicles on display, all of which are also available for test drives.

This family-friendly event has entertainment for the children in the form of a fun kids’ play area.